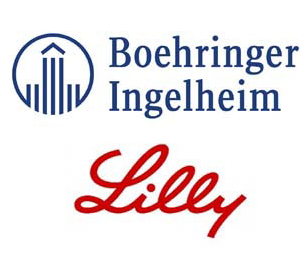 INDIANAPOLIS and RIDGEFIELD, Conn., Aug. 18, 2014 /PRNewswire/ -- The U.S. Food and Drug Administration (FDA) today granted tentative approval for Basaglar™ (insulin glargine injection), which is indicated to improve glycemic control in adults with type 2 diabetes and in combination with mealtime insulin in adults and pediatric patients with type 1 diabetes. Basaglar is not recommended for the treatment of diabetic ketoacidosis.？ Basaglar is Eli Lilly and Company (NYSE: LLY) and Boehringer Ingelheim's basal insulin, which is intended to provide long-lasting blood sugar control in between meals and during the night.1

Basaglar has the same amino acid sequence as the currently marketed insulin glargine product and was tentatively approved for use with KwikPen®, a pre-filled dosing device. Basaglar is contraindicated during episodes of hypoglycemia and in patients with hypersensitivity to insulin glargine or one of its other ingredients.

With a tentative approval, the FDA has determined that Basaglar meets all of the regulatory requirements for approval, but it is subject to an automatic stay of up to 30 months as a result of litigation filed by Sanofi, claiming patent infringement. Under the Drug Price Competition and Patent Term Restoration Act ("Hatch Waxman"), the FDA cannot give final approval until the end of the 30-month period in mid-2016, unless the court finds in favor of Lilly earlier.

"The tentative approval for Basaglar is another step toward providing an important option for people with diabetes in the U.S. who need basal insulin treatment," said Enrique Conterno, president, Lilly Diabetes.？ "We believe insulin glargine will continue to be used widely for many years, and Lilly and Boehringer Ingelheim are committed to addressing the needs of people living with diabetes and providing support beyond the medicine."

The tentative approval is based, in part, on results from Lilly and Boehringer Ingelheim's extensive clinical development program for the alliance's insulin glargine product. The submission included results from pharmacokinetic and pharmacodynamics studies, as well as Phase III studies in people with type 1 and type 2 diabetes.

The Basaglar new drug application was filed through the FDA's 505(b)(2) regulatory pathway, which allows the agency to consider the efficacy and safety of the existing insulin glargine product. Lilly-Boehringer Ingelheim's insulin glargine product is considered a biosimilar in other regions such as Europe, where it recently received a positive recommendation from the Committee for Medicinal Products for Human Use (CHMP), a division of the European Medicines Agency. Basaglar is not considered a biosimilar in the United States.

"Because of the combined diabetes, development and commercialization experience of Lilly and Boehringer Ingelheim, we are confident that Basaglar, upon final approval, will become a valuable treatment choice for people who need a basal insulin to manage their type 1 or type 2 diabetes," said Christophe Arbet-Engels, M.D., Ph.D., vice president, metabolic-clinical development and medical affairs, Boehringer Ingelheim Pharmaceuticals, Inc.

The trade name 'Basaglar' was granted provisional approval by FDA and will be used in the U.S. market once the product is made available to patients. While 'Abasria®' is an approved name in Europe, it's not necessarily approved in other regions. Lilly and Boehringer Ingelheim are targeting a global trade name outside of the United States for the alliance's insulin glargine product, which will be announced at a later date.

Approximately 29 million Americans2 and an estimated 382 million people worldwide have type 1 or type 2 diabetes.3 Type 2 diabetes is the most common type, accounting for an estimated 85 to 95 percent of all diabetes cases. Diabetes is a chronic condition that occurs when the body either does not properly produce, or use, the hormone insulin.

2014/08/28 - Jardiance(empagliflozin) tablets are now available by prescription in pharmacies across the United States, including Walgreens, Rite Aid, Kroger and many other leading chain and independent retailers, according to Boehringer Ingelheim Pharmaceuticals, Inc. (BIPI) and Eli Lilly and Company (NYSE: LLY).

As the benefits and safety of Pradaxa (dabigatran etexilate) are once again confirmed, Boehringer Ingelheim continues to look for new ways for Pradaxa to help more patients

2014/05/16 - As the benefits and safety of Pradaxa (dabigatran etexilate) are once again confirmed, Boehringer Ingelheim continues to look for new ways for Pradaxa to help more patients

2014/09/05 - Today the FDA approved Keytruda (pembrolizumab), a new treatment for advanced melanoma, the deadliest form of skin cancer. Melanoma patients have been waiting anxiously for this day, given the promising data that early studies have shown.

2014/10/20 - FDA staffers aren't as impressed with new safety data on Chantix as Pfizer ($PFE) wants them to be. In briefing documents filed in advance of Thursday's advisory committee meeting, reviewers say the stop-smoking remedy should keep its black-box warning about potential psychiatric side effects.